This application lets you generate wavetables for the Doepfer A-112 sampler module. The wavetables can be easily uploaded to the module with a connected MIDI interface.

The programm provides two ways of generating wavetables: Declare your own waves with a simple scripting interface or assemble existing WAV files to a wavetable.

A-112 Waves is a Java application and should run with any operating system supported by Java. It is tested with Windows and Mac OS. A Java Runtime Environment (Version 1.7 or above) is required to launch A-112 Waves.

The screenshots in this manual are made with Mac OS. The application looks slightly different on other platforms but the functions and workflows are the same.

For A-112 Waves to work it is mandatory that you have installed a Java Runtime Environment (at least version 1.7). It is recommended that you have a MIDI interface and a Doepfer A-112 sampler module connected to this interface. This is not necessarily needed, but without one of them, you can only save the generated wavetables to disk.

With the tabs on top of the application window you can select which functions you want to perform.

On the bottom edge an oscilloscope-like view of your generated wavetable is shown. 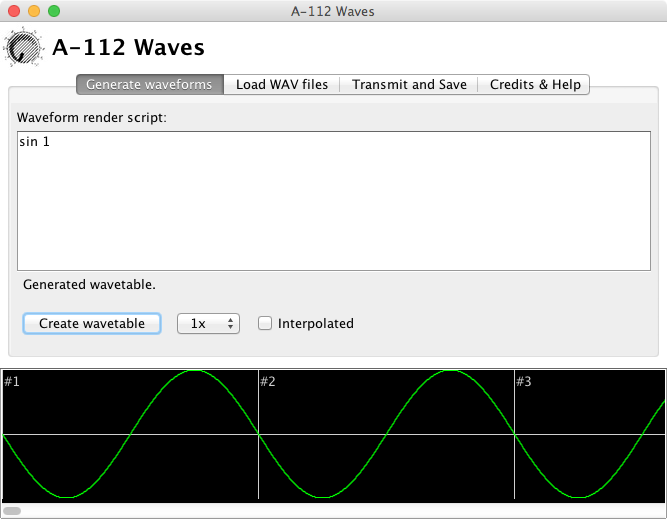 With a simple script you can generate the waveforms of your liking. Each line contains the declaration of one waveform type with parameters describing the harmonic content of the generated waveform. The script can produce the following type of bandwidth limited waves: Sine, saw-tooth, triangle and square.

Produces one sine wave with the fundamental frequency and the 2nd, 3rd and 4th harmonic.

Creates a sweep from 1 to 7 and back from 6 to 2 harmonic frequency resulting in over-all 12 waves.

And the same goes for saw, tri and squ as waveform type. A more complex script with several wave types would be something like this:

Hope, you get the idea. Below the scripting text field the number of resulting waves is displayed or an error message if something is wrong with what you entered. You can enter lines with comments starting with #.

Click the “Create wavetable” button and the scripted wavetable is generated. The result will be visible in the oscilloscope view on the bottom edge.

Doepfer A-112 wavetables are 65536 bytes long and have 256 waveforms with 256 samples each. This is represented by the grid and the labels “#1, #2, …” in the oscilloscope view. With the Frequency factor setting right to the “Create wavetable” button (1x, 2x, 4x) you can choose if a scripted wave should be rendered with one cycle in 256 samples, two cycles or four. This results in doubling or quadrupling the resulting frequency when playing the wave. 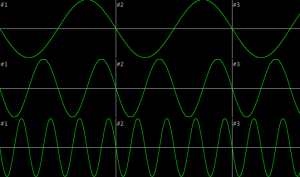 I find this especially useful if you are looking for the sweet spot for your waves (approximately 2 octaves) where the tuning tracking CV (volts/octave) of the A-112 is roughly in pitch.

With the “Interpolated” check box you can produce a smooth transition between these chunks of the same waveform.

Hard to understand? Just play with it and check the results. For example sweeping through wavetables with the Wave-CV-in on the A-112 gets a lot smoother with interpolated waves. 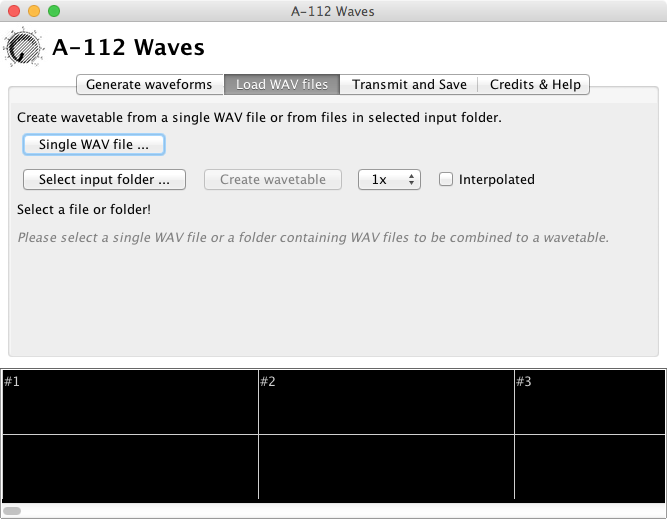 With the button “Single WAV file” you can upload a complete wav file to your A-112 sampler. Just press the button, select a WAV file and you are done. The WAV file is downmixed to mono, resampled to 65536 samples and bit-reduced to 8 bit. You will see what you get in the oscilloscope view on the bottom.

If you want to generate a A-112 wavetable out of several existing wave cycles in WAV files, simply copy the WAV files into a folder and press the “Select input folder” button to open the folder with all the WAV files. The folder is scanned and all matching WAV files will be assembled to a wavetable as soon as you press “Create wavetable”.

The options Frequency Factor and Interpolated do the same as mentioned above.

A great source for waveforms:

A cool scandinavian guy called “Adventure Kid” generated packs of WAV files with all sorts of waveforms. You can download these here:
www.adventurekid.se/akrt/waveforms/adventure-kid-waveforms

Unzip the downloaded waveform pack, select one of the wave folders and press “Create wavetable”. It’s really fun to play around with these waveforms and the A-112. And actually these waveform packs are the main reason why I started programming A-112 Waves. 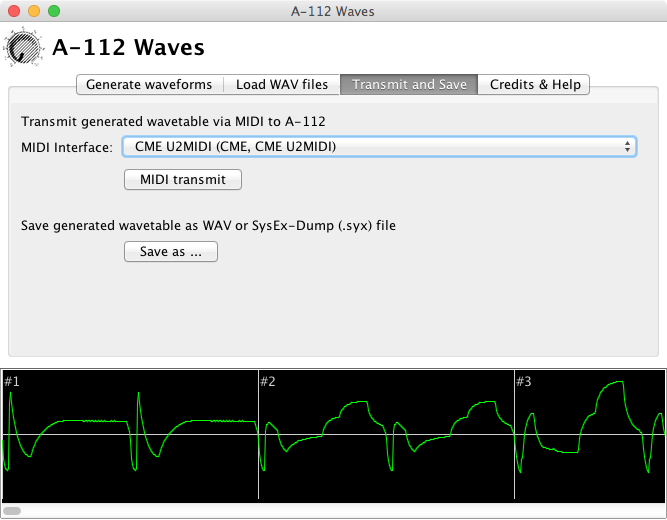 This is where all you did before gets real. You can either transmit the generated wavetable directly to the A-112 via MIDI or save it to disk as WAV file or MIDI sys-ex dump file. These files can be transferred with other tools to the A-112 or you can do with them whatever you like.

If you have a MIDI interface connected from your computer to the A-112 all you have to do is:

The source code of A-112 Waves is available on GitHub:
https://github.com/privatepublic-de/A-112-Waves